Struggling to find direction and purpose a student turns his life around. 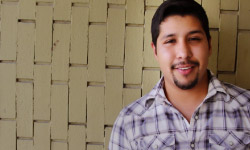 Luis Alfonso struggled to stay away from the violent culture that permeates the border town of Monterrey, Mexico. An innovative IT program and the CCNA curriculum sparked his interest in networking and put him on a path to independence and prosperity.

The Struggle to Stay in School

Since 2008, turf battles between warring drug cartels have left their mark on Monterrey, a city of over 1 million people just 135 miles from the U.S. border. Drug use and violence are everywhere. High school students walk through heavy iron gates to class, passing armed guards and walls riddled with bullet holes. Gang members have infiltrated the city’s technical high schools, recruiting students through threats and intimidation. Young people who lack skills for traditional jobs are tempted to enter the high-paying, high-risk world of narcotics and crime.

When Luis was 11, his father lost his job at a technology college and moved to the United States for work. Luis struggled to find direction and purpose in his life. By the time he was 17, he had been expelled from school, lost his job, and argued with his mother. When Luis realized how far he had fallen, he committed to turning his life around and helping his family.

Learning in a Safe Space

Luis’s mother discovered an opportunity at the high school for her struggling son. The ICT Networking and Entrepreneurship Skills Development program combines Cisco Networking Academy courses with entrepreneurship training through a partnership between Cisco, the United States Agency for International Development (USAID), World Learning, and the Mexican Secretariat of Public Education. By giving at-risk youth access to safe spaces and ICT and entrepreneurship skills, they hope to counter the allure of the cartels in the border towns with rewarding career opportunities.

Luis signed up and passed the IT Essentials course with straight A’s. But he was bored with the basic class and nearly dropped out of the program. His mother urged him to take the more-advanced Cisco CCNA courses. There, he finally found his passion in the form of networking technology.

“Luis was stuck,” his mother said. “He didn’t know how to take off the straps holding him to the ground. Cisco helped him break free from those ties and take off.”

Luis passed CCNA 1 with high marks, then enrolled in CCNA 2, where he helped assemble laboratories and set up networking equipment for other students. “I felt like a child in a toy store,” Luis said. The Networking Academy courses didn’t just connect Luis to the world of technology — they gave him the confidence to pursue a better future for himself and his family.

Luis graduated in July 2014, at age 21, and received a 4-year scholarship from the Universidad Autónoma de Nuevo Leon (UANL) to continue his studies in networking technology and engineering. Luis works part-time as a network administrator at a local private club in Monterrey, managing networks and IP cameras. He started his own networking support services company, LR Comp, and recruited 3 students from the program to grow his business, creating jobs for others in his community.

“Cisco changed my life,” Luis said. “Cisco gave me the maturity to carry things, inspired my company, and inspired me.”